63. Tombstone - Town too tough to die

Tombstone is a town just next to the Mexican border and labelled as 'the town too tough to die'. It  is also the place where the famous gunfight between Wyatt Earp and his brothers together with Doc Holliday fought a gun battle with the Clanton and McLaury gang at the OK Corral.
It is not a very long drive from Phoenix and it was my dream to see what Tombstone looked like. We took the I.10 highway which is a very long highway which leads all the way through New Mexico to Texas. On the way, you will pass by Tucson another famous Western town. It is now a beautiful city with which has the famous Old Tucson Studios where many old western movies were filmed there including John Wayne movies such as Rio Lobo and Tombstone. Drive on till you reach a town called Benson and head off to Route 80 which will bring you to Tombstone. As you enter the tow of Tombstone, you will see the famous Boothill cemetery where the Clanton gang were burried. Immediately upon arrival, you will have the feel of a real Western town although you see lots of modern cars parked there.
I had to visit all the sites and I really enjoyed myself there. Here are some pics of places I took of Tombstone. 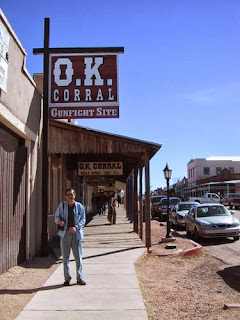 This is entrance to the famous gunfight site. 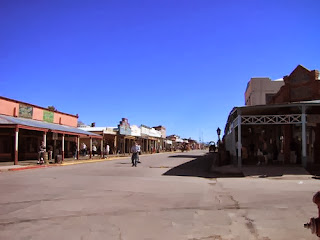 On the streets of Tombstone 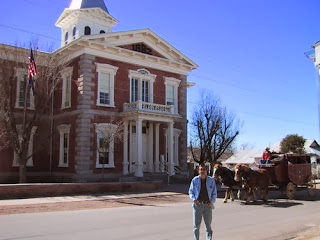 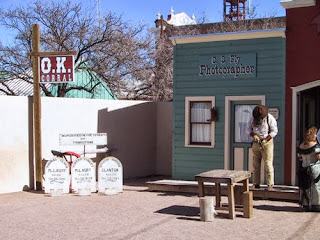 The site of the gunfight 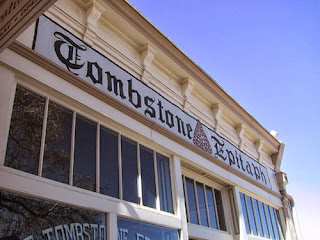 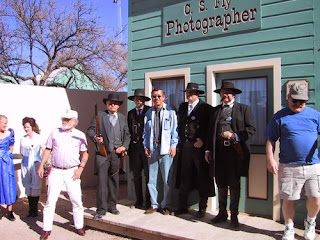 Standing with 'Wyatt Earp and brothers' 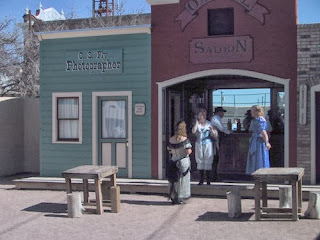 Actors posing as 'bargirls' at a bar 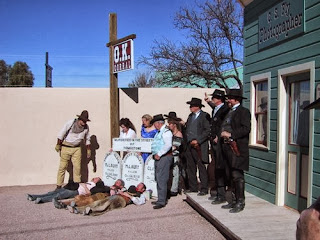 After the 'gunfight'  with the fake headstones


The actual 'gunfight lasted only a few minutes but Hollywood made it more exciting.  There is a seating galery for viewers to watch the 'gunfight' and it was awesome. After the show, it was time for me to catch the other sites of Tombstone. It was a desert town and though the sun was above us, the weather was still cool and depending on the breeze, it can get rather cold esp. during the winter months.
We left Tombstone and headed back to Phoenix enjoying the beautiful desert scenery and the Saguaro National Park and the snowcapped Tucson Mountain.


Posted by The Travelling Foodie at 7:19 PM