36) Meeting up with the old boys again 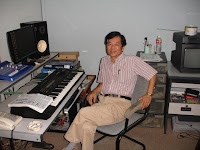 It has been a few decades since I lost contact with some of my old buddies of the sixties. As I am now based in Kuala Lumpur, I decided to try to locate Tommy Ong, the former bassist of the Fabulous Falcons. I knew that he has a recording studio in Petaling Jaya and with a little help from his younger brother, Michael I managed to get his contact number. After a short chat about old times, we arranged to meet up at his studio. When I arrived at the studio, I was surprised that Tommy had arranged for Kai Leong aka technician (as he was in charge of all the technical aspect for the band then) to be there too. Was really a very nice surprise ! As we chatted, Kai Leong told me he is still in contact with some of the other guys like Tony Lee aka Kachat who was the drummer before I rejoined the Fabulous Falcons and Ho Kok Onn aka Cliff Richard of Ipoh who is also residing in Petaling Jaya area. I was overwhelmed as I had never expected to be able to meet up with so many people from the good old band days again.

A week later, we decided to meet up for lunch so that Ho Kok Onn could join us too. Unfortunately, Tommy had to meet a client on that day at the last minute and couldn't make it so Kai Leong and I met up with Kok Onn at a coffeeshop near Kok Onn's house. It was really so nice to meet Kok Onn again and of course the topic of conversation was of the good old days of the Fabulous Falcons. Although we have all grown much older, I must say the energy of the meeting was just like the days when we were in our teens in the sixties. Just reminsicing made us feel so young again !

I am really glad that I am now in contact with my long lost friends and we can reminisce about the good old days when we were performing together.
Posted by The Travelling Foodie at 11:23 PM 5 comments: