After my six months’ contract with Green Fern another offer from Tambun Inn came my way. I was to entertain at the coffee house of Tambun Inn, a hotel along . This was already in the early eighties and my two boys were growing up fast. Financially, we were comfortable but I had this sadness of not being able to spend time with my family and was afraid that I will lose out on my sons’ growing up years. But sacrifices had to be made and I decided to stay and earn as much as I can as I was getting much more from my music than my salary with the civil service. I can’t recall how long I was entertaining at Tambun Inn but must be close to 2 years.

By this time, Green Fern Coffee House had a change of ownership and one of the new owners of the coffee house was my friend Matthew. He offered me a contract to return to Green Fern once more. I was happy to move around as this made the offers more attractive each time I moved. I seem to be holding the trump card as I was able to command a better contract each time I negotiated for one. I entertained in Green Fern for nearly a year until I met up with Andrew Thong. His partner Joey had just left him and he was looking for a new partner to team up with as he had a contract at Miner’s Arms, a pub and grill in downtown, . Although Green Fern made me a counter offer to stay on, the offer at Miner’s Arms was too good to resist and after all, money was what I was working so hard for. I accepted the offer and teamed up with Andrew to play at Miner’s Arms, me on the keyboard and Andrew on the guitar while we took turns to sing. This partnership was to last for 2-3 years until finally our contract ended and Andrew decided to leave .

Posted by The Travelling Foodie at 3:15 AM 2 comments: 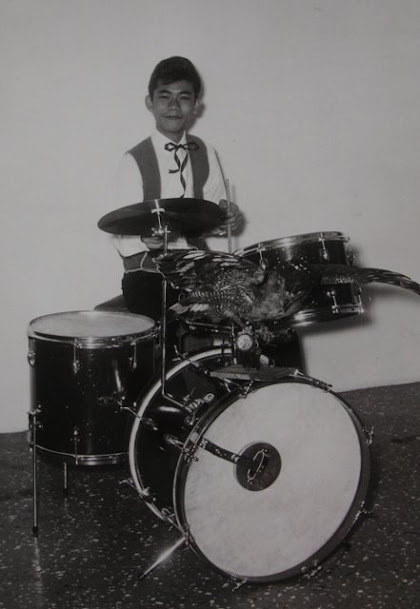 After The Brain disbanded, Thomas Ham left for the and Tommy started his business in . Christopher aka 13 returned to . He got sick and was no more his usual self. I used to see him occasionally when he dropped in at Green Fern to see me or at times, Johnny Lee aka Matt Monroe of brought him to our house. I remembered so well the Christopher I used to know, the fun loving guy who had a mind of his own and a genius where music was concerned. Not long after, I was saddened by the news that Christopher was the victim of a hit and run accident at . He died shortly after. The Star interviewed me and they wrote a feature on his life titled “The day the music died”
Posted by The Travelling Foodie at 2:29 AM No comments: