Looking through some of my collection of photographs, I managed to find a few more which I have put up in my blog.  I will be putting up more pics from time to time once I have gone through my collection. These pics are all in black and white as we didn't have colour pics at that time. Hope you guys like them. 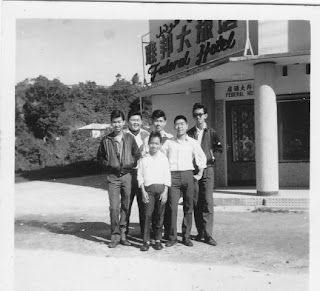 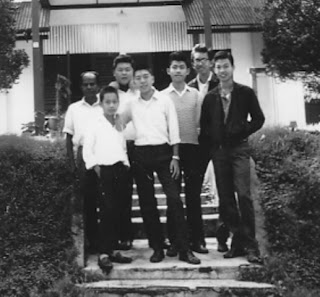 These pics were taken when we were in Cameron Highlands for our Christmas gig at Federal Hotel. Pics show us at a very young age together with our manager Robert Ng (standing at the back)

Pic on the right shows us in Bangkok . Chris Choong (13) at left and me on the right together with a couple of friends standing next to a Tuk-tuk on a busy boulevard.
Posted by The Travelling Foodie at 12:44 AM No comments:

39. Looking back into the past

As I was going through some of my collection of old photos, I came upon an old  photo of The Fabulous Falcons in Cameron Highlands. This photo was taken way back when we were very young and just formed the band.  We performed at the Federal Hotel in Tanah Rata, Cameron Highlands on Christmas Eve.

We were taken on a tour to a British military camp in Tanah Rata where we were feted by some wonderful and friendly guys there. Can't remember their names now as it has been a few decades ago and we were just young boys then. We had a great time celebrating Christmas with them. 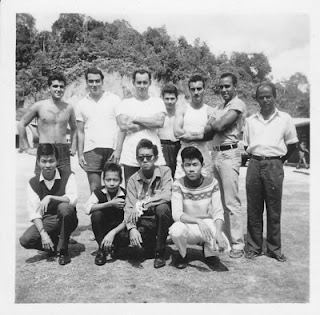 From left:  Michael Ho , Thomas Ham, Joe Chin, and Chris Choong (13)
Posted by The Travelling Foodie at 8:09 PM No comments: